The NewYork-Presbyterian Hospital/Weill Cornell Medical Center opened a new state of the art hospital in May 1997. The Department of Obstetrics and Gynecology has a number of divisions, with appointed Chiefs that are listed below:

There are 41 full time members of the Ob/Gyn faculty who are Obstetrician-Gynecologists. They are readily available and are involved in the resident education on a full-time basis.

The inpatient teaching program is centered at the NewYork-Presbyterian/Weill Cornell Medical Center; the service includes 68 beds divided between Obstetrics and Gynecology. During the day, the Residents are divided into three teams: Obstetrics, Gynecology and Oncology, while at night, these services are covered by four night float Residents. This system allows us to be in compliance with the NY State Resident Work Hour Guidelines as set forth by the Bell Commission.

The Obstetrics Service includes a Service Chief and three daytime junior Residents: a PGY-1 managing Triage, a PGY-2 overseeing the antepartum service, and a PGY-2 on labor and delivery. At night, the labor floor is managed by a third year Resident with supervision from the Night Float Chief. Each morning, there are board rounds with the in-house Attending and several MFM Attendings and Fellows to review the service and educate the Residents on relevant topics. In addition, a variety of specialty conferences are held weekly, covering obstetrical topics in Perinatology, Neonatology, ultrasound, and fetal heart rate monitoring. There were 5150 deliveries in the year 2007. Twenty percent of these deliveries are clinic patients. Of the remaining private deliveries, about 30% are cesarean sections; all done by the Residents. Residents also participate in the majority of private vaginal deliveries. Residents receive a broad and extensive obstetrical experience through the institution's large faculty practice and the Resident's own clinic population. There are nine MFM full-time faculty and two MFM specialists on the private staff, as well as three MFM fellows.

The Gynecology Service is comprised of five Residents during the daytime, including a Service Chief, a PGY-3, a PGY-2, and two PGY-1's. At night, the Gyn Service and the ER are covered by a PGY-1, with close supervision by a PGY-2 and the Night Float Chief. Operative Gynecology is taught by both full-time and private Attendings in the NewYork-Presbyterian/Weill Cornell Medical Center operating rooms (as well as at NYHMC-Queens as detailed below). Two to three rooms of major cases and two to three rooms of minor cases run each day. Residents scrub on cases at all levels of training, with an attempt made to match their experience with the difficulty of the case. In approximately 95% of cases, a Resident serves as the Primary Surgeon or 1st Assistant. Cases from the Resident Clinic constitute 15% of total volume. The Chief Residents who graduated in 2007 performed an average of 80 abdominal hysterectomies and 26 vaginal hysterectomies, plus a similar number of major cases that did not involve hysterectomy. There is also a high volume of major operative and laparoscopy cases. In addition, the Residents participate in weekly case conferences with Gyn Attendings, and daily team rounds.

The Oncology Service consists of three Residents during the daytime: a Service Chief, a PGY-3, and a PGY-1, while at night the service is covered by an in-house PGY-2 with supervision by the Chief resident. The Chief Resident and PGY-3 perform all of the oncology surgeries during their two-month rotation, and the PGY-1 manages the care of the oncology patients on the floor, under the supervision of the PGY-3 and Chief. The Oncology Team participates in daily teaching rounds with their three Attendings, and presents at the weekly Tumor Board Conference. In addition, the Residents participate in the weekly Colposcopy and Oncology clinics.

REI experience is obtained in several ways. PGY-3's spend four weeks with various Attendings within the REI Department learning the proper workup of various hormonal disorders and infertility, and are introduced to the process of In Vitro Fertilization by accompanying Attendings in performing ultrasonography, hysterosalpingography, egg retrievals, and embryo transfers. In the Chief year, the Residents see their own REI patients in the clinic, and also have another dedicated block of time where they spend each day with an REI Attending and Fellow. In addition, all Residents gain extensive experience in laparoscopy, hysteroscopy, laser surgery, microsurgery, and other endocrine/infertility procedures with the department during the Gynecology rotation.

The Center for Reproductive Medicine and Infertility is the largest assisted reproduction program in the USA (2,164 retrievals in the year 2005) and encompasses a large ovulation induction program. The total patient visit volume exceeds 70,000 patients. There are ten (10) Attending Physicians and six Fellows. The department opened its Infertility Center, with office and OR space devoted exclusively to infertility treatment and in vitro fertilization, in September 1986.

Education in Ambulatory Ob/Gyn is provided through the Division of Women's Health and its busy clinic (over 18,000 visits per year). This clinic is supervised by a cadre of senior and junior Attendings, all of whom are dedicated to the instruction of the Residents. Residents attend Continuity Clinic sessions 1/2 to 1 day a week, throughout their four years, and come to know their patients well. Continuity sessions typically consist of a variety of patients, ranging from the adolescent to the elderly. Residents quickly become versed in providing annual exams, routine prenatal care, preventative health, management of contraception, or more focused care, such as IUD placement and other minor office procedures.

Patients are scheduled to see their individual Residents using a computerized system accessible throughout the hospital. Specialty clinics are held for Colposcopy, High-Risk Obstetrics, Oncology, Adolescent Gynecology, Urogynecology and Endocrinology/Infertility. In their Chief year, each Resident spends two months supervising the clinic, where they run the specialty sessions and see their own continuity patients. Most importantly, they are responsible for the proper workup, counseling, and scheduling of all referred patients for surgery. Those patients booked for surgery are then operated on by the same Chief during their subsequent Gyn rotation. 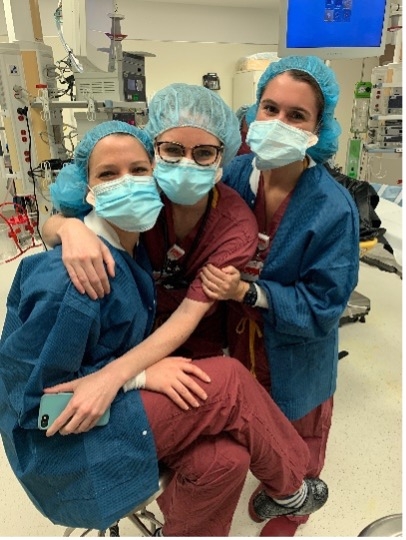 Each morning, Residents review their service and cases with a conference of generalists and sub-specialists to clarify the evidence-based logic behind clinical decisions and surgical management. The PGY-1 is responsible for all ambulatory surgeries, while the PGY-2 manages Labor and Delivery and the Antepartum service. The remaining three Residents from the PGY-3 or PGY-4 class are responsible for the major Gyn and Gyn Oncology surgeries. All Residents and a team of Physician Assistants share responsibility for the comprehensive surgical service. Didactic teaching at Queens consists of a weekly Evidence Based Lecture Series, Grand Rounds, Pathology Conference, Tumor Board and regular teaching rounds. Second and third year Residents typically take call at Queens every third night. Transportation is provided by a shared hospital-owned car and a free hospital shuttle.Residents rotate through the New York Hospital Medical Center of Queens (NYHQ), a community teaching affiliate of NewYork-Presbyterian/Weill Cornell in Flushing, New York. Typically, there are five Residents rotating at "Queens" at any given time; each for about two to three months a year. At all levels of training, Residents gain a valuable hands-on experience in Gynecology, Obstetrics, Emergency Medicine and Gyn Oncology. The New York Hospital-Queens offers a large and diverse faculty in General Ob/Gyn, along with two Maternal Fetal Medicine specialists, two Gyn-Oncologists and one Reproductive Endocrinologist.